On my first trip to Suriname in July 2016, while I was familiarizing myself with the local geology, climate, infrastructure, and most importantly, human capital, I was taken on a field trip to Nassau by the V.P. Exploration of Sumin Mines. Sumin Mines was a locally-incorporated private company that had acquired up to an 80% interest in a 210 square kilometre exploration permit covering much of the Nassau Plateau from a local company.  During the period 2013 to 2016 Sumin and its joint venture partner Mariana Resources had spent approximately $1.8 million on the Nassau Project before running out of money. The project currently consists of approximately 20,000 hectares in two Exploitation concessions that must be renewed in 2025.
The reason the Nassau project had been acquired by Sumin is that it is in the same stratigraphy of the Merian gold deposit and ties on to the Merian gold deposit. The northern boundary of the Nassau exploration permit is 15 km from the Merian deposit. Moreover, Newmont has discovered a satellite gold deposit called Sabajo that is 27 kilometres west of (and hauling distance from) the Merian deposit and 19 kilometres northwest of the Nassau project. Moreover, a northwest structural zone appears to extend from Nassau to the Sabajo deposit. 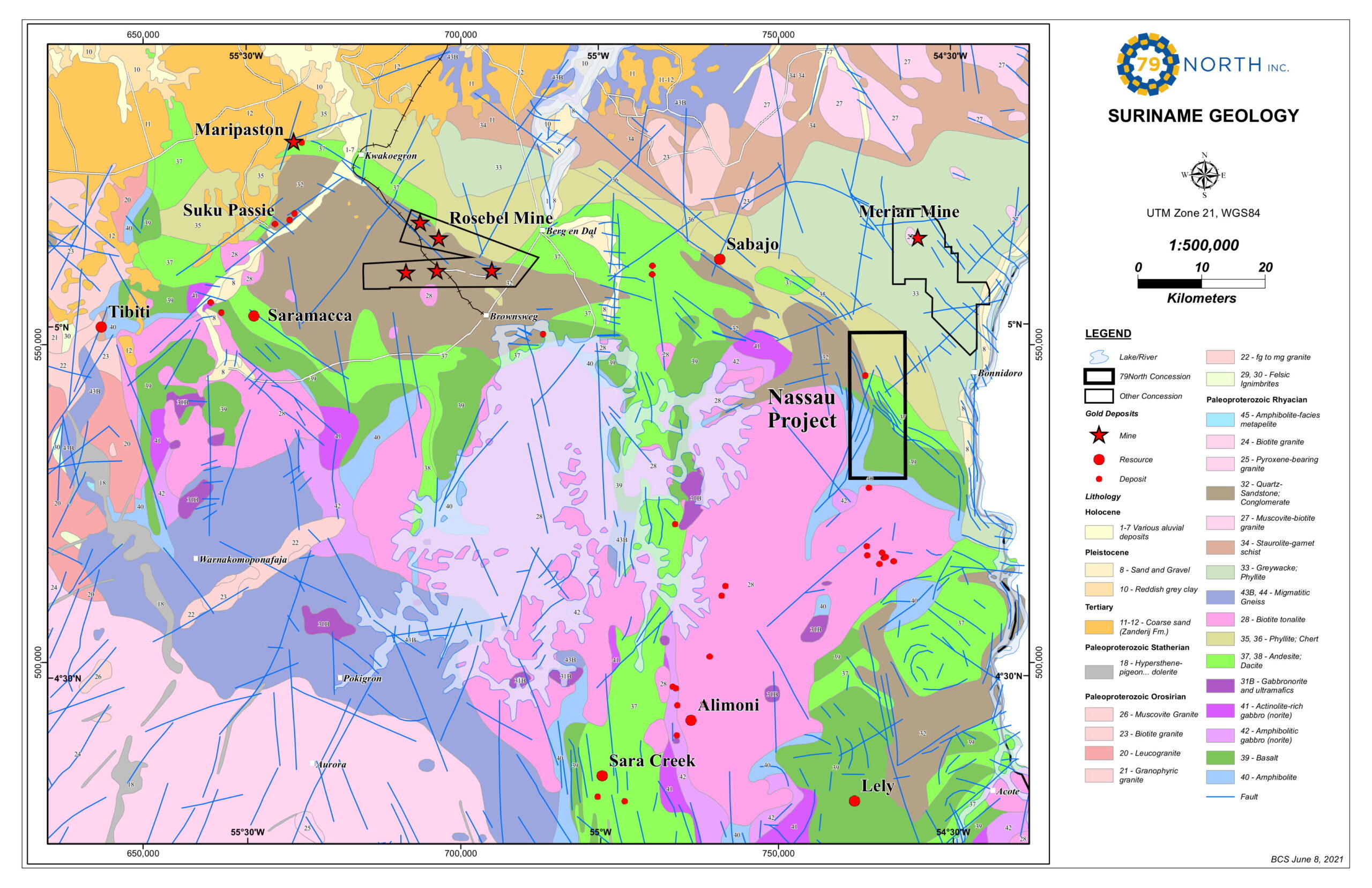 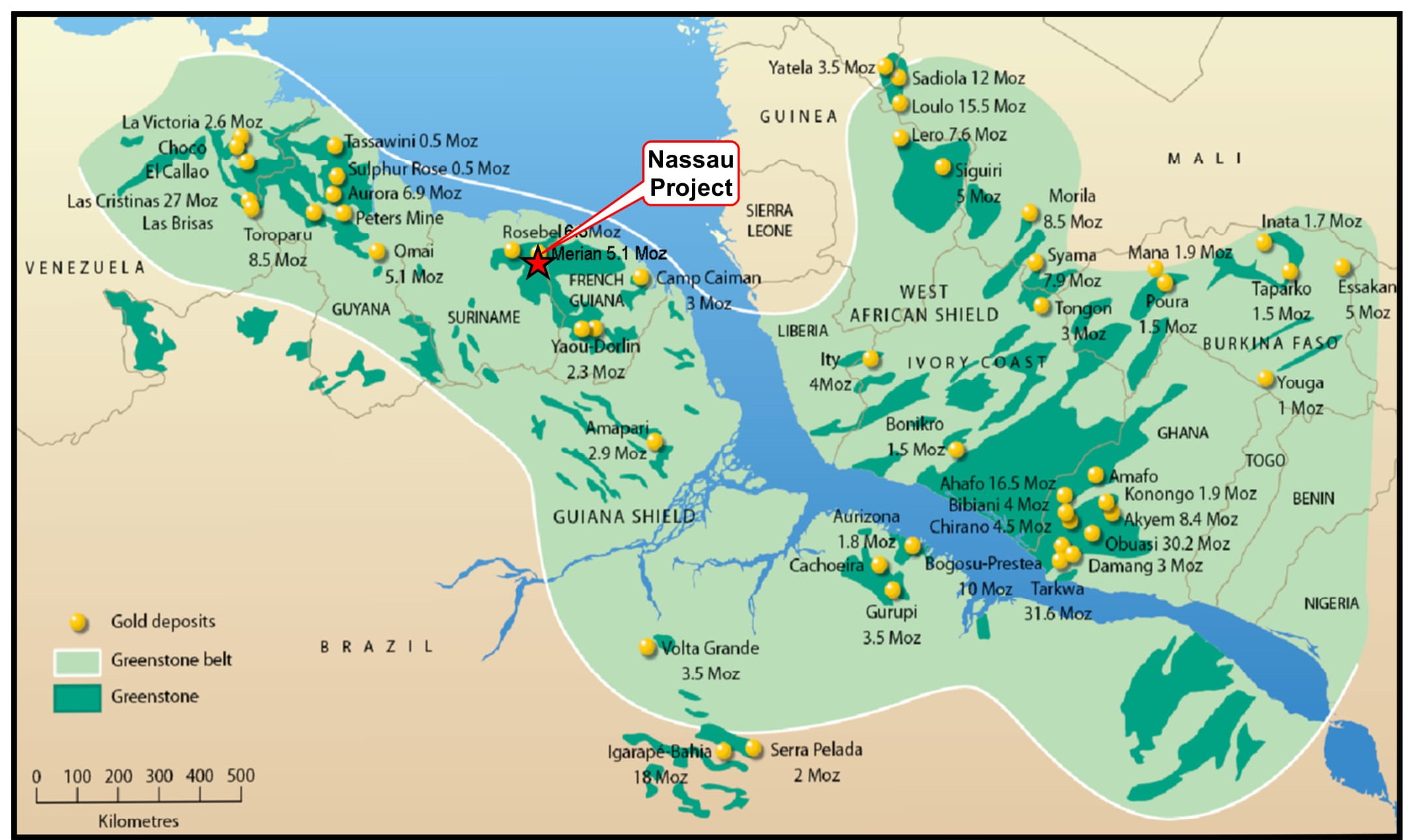 In July 2016 we chartered a Robinson R44 helicopter from Pegasus Air, a local Surinamese company specializing in rotary wing aircraft, and took the half hour flight from Paramaribo, south to the Nassau Plateau. The northern leg of the flight is over sparsely-vegetated coastal plane with some open savannah and then the terrain abruptly rises to the topography of the Precambrian basement rocks with plateaus of laterite duricrust that are undergoing dissection by creeks and rivers of the equatorial rainforest. For much of the flight we were over high canopy jungle where there were no landing options for aircraft. 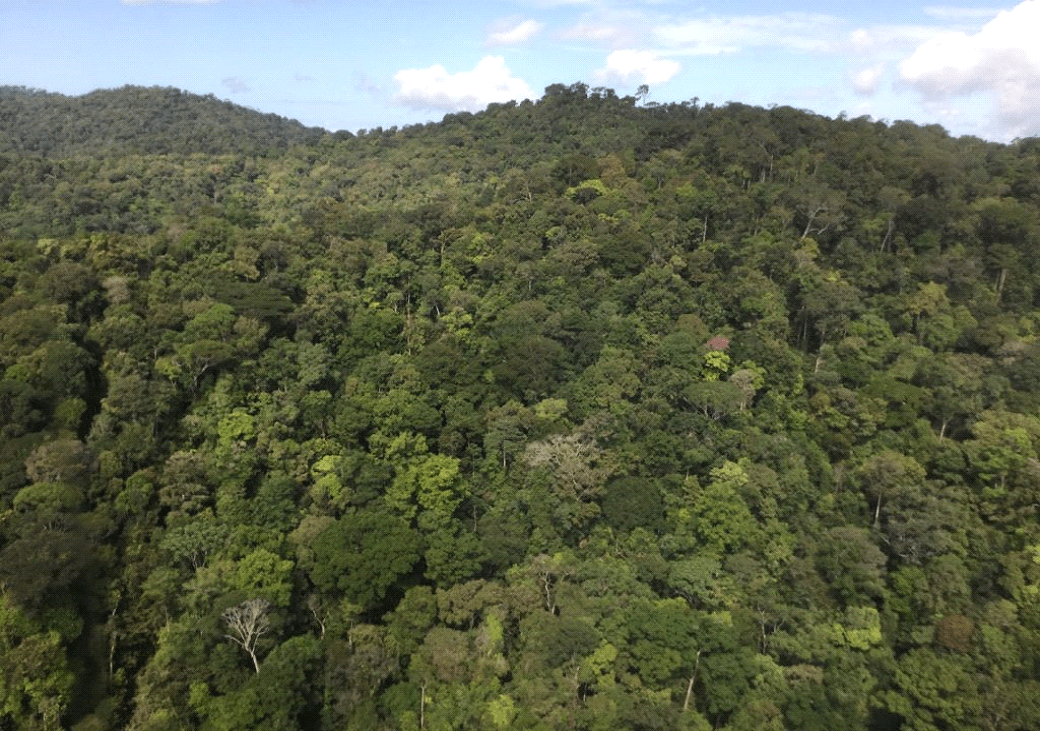 Photo of the Nassau Plateau from helicopter

When we encountered the Nassau Plateau, the dominant topographic feature of the area, we climbed to about 500 metres above the coastal plain where we could see the vast areas of gold mining in the Bowl, Bamboo, and Witlage targets. 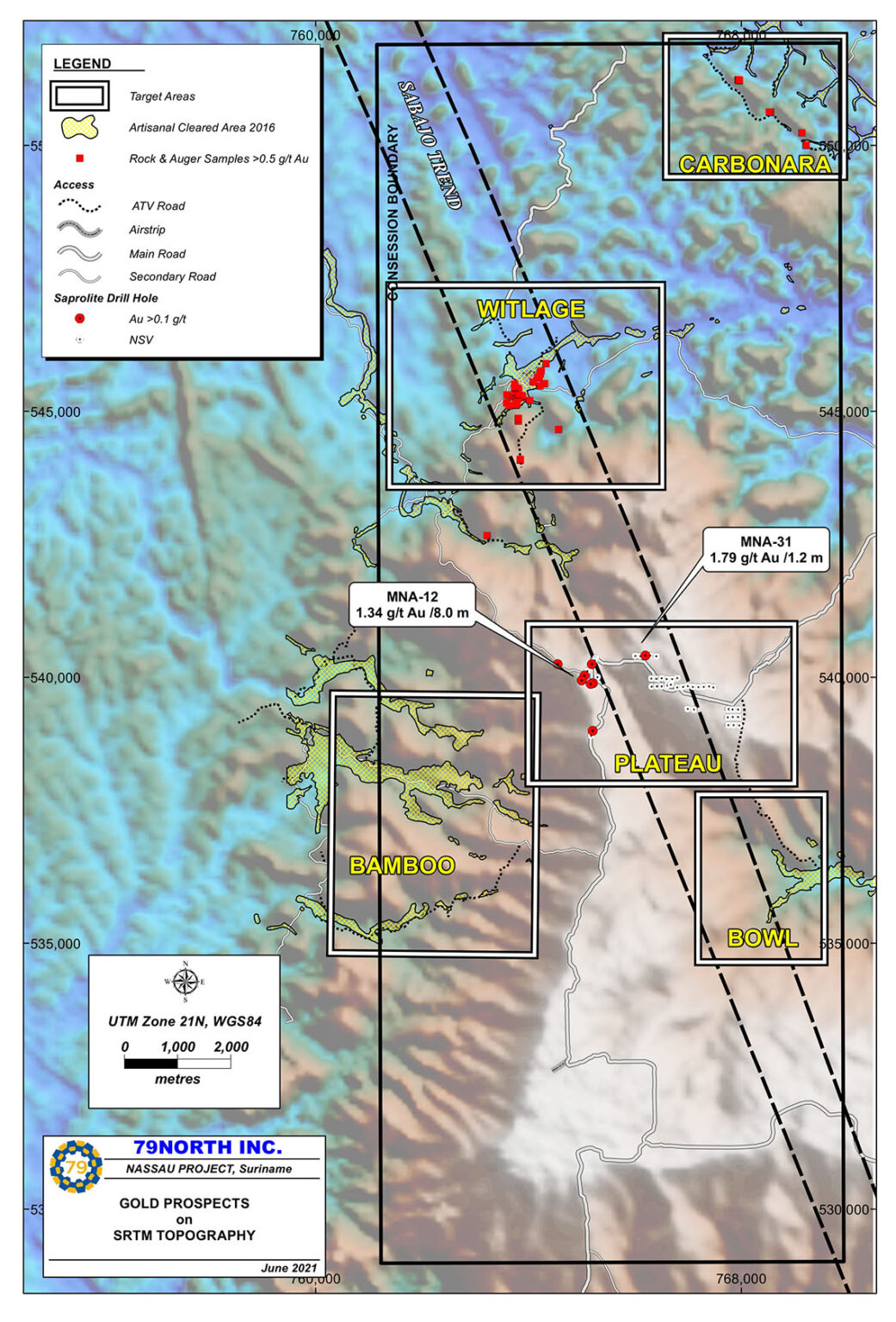 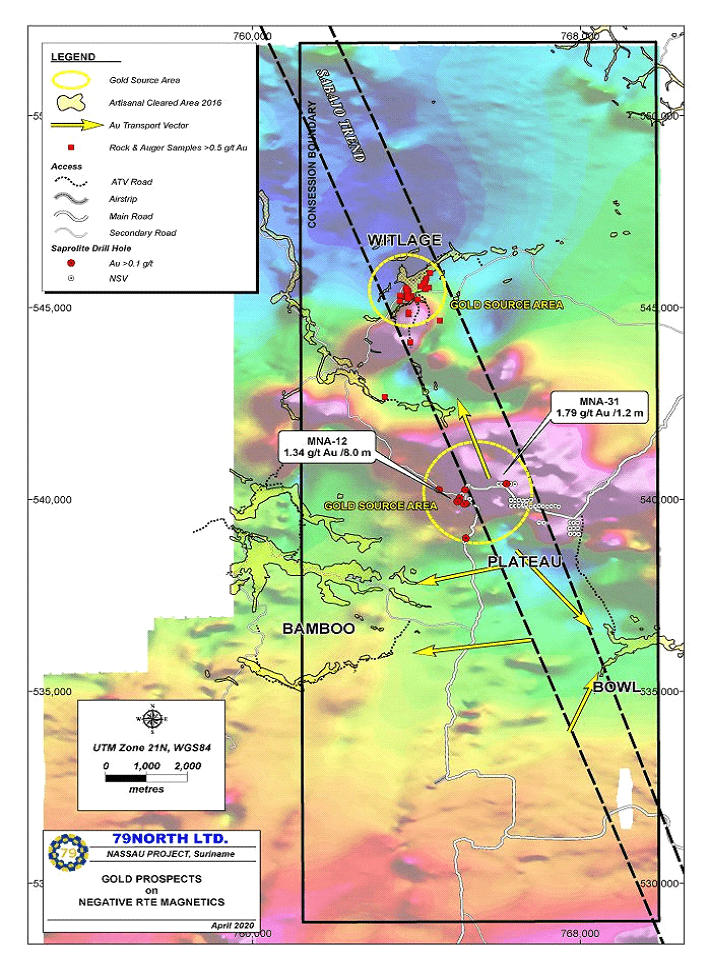 Geophysical and geologic ingredients of the Nassau Project

It was obvious from that vantage point that gold was being shed off the Nassau Plateau into the Bowl, Bamboo, and Witlage drainages and that accordingly, there had to be a primary gold source in the Nassau Plateau. We then landed at the Witlage area where we could see excavator-sluice box operations that have been washing gold from the hillsides and drainage of the Witlage creek system for more than 100 years. 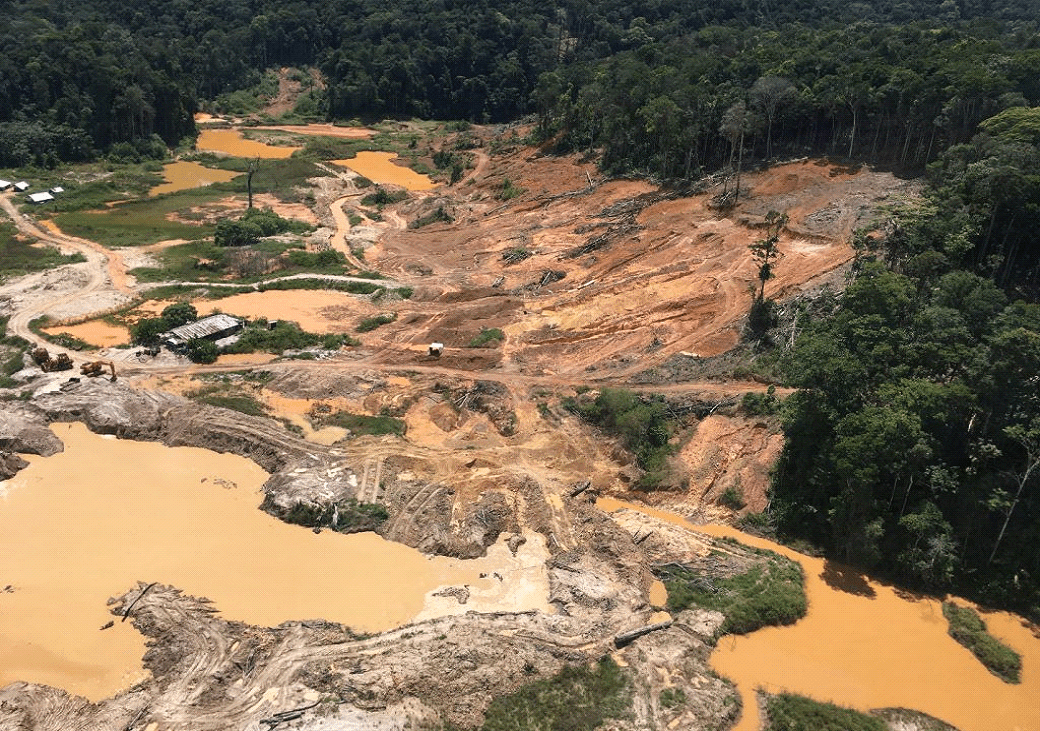 In was in the Witlage area that Sumin spent the majority of the $1.8 million that it spent on the exploration of the Nassau project.  The attraction is that the informal miners have exposed gold-bearing bedrock and saprolite in the Witlage drainage where samples of quartz veins collected by Sumin contained up to 49.8 ppm gold. However, there had been almost no exploration of the Nassau Plateau upstream of the Witlage, Bamboo and Bowl drainages (i.e. the plateau itself) although the plateau is the source of the alluvial gold in each area.  Moreover, hand and power auger samples southeast of Witlage to the peak of the Nassau Plateau have encountered a contact of volcanic and sedimentary rocks with clear indications of a structural boundary, about which there are highly-altered gold bearing volcanic rocks on the east side of the structural zone in auger hole MNA-31 and highly altered, gold-bearing sedimentary rocks on the west side of the structural zone in auger hole MNA-12.
In spite of the abundance of gold that is being shed from the Nassau Plateau into the Bamboo, Bowl, and Witlage drainages, the fact that there has been alluvial/colluvial/saprolite mining for 100 years, the fact that there are high grades of gold encountered in rock samples and in auger samples, and the fact that the project is in fertile stratigraphy tying on to the Newmont Merian mining license, and only 15 kilometres from the Merian pit and along a structural trend of the Sabajo deposit, there has never been a gold resource defined at the Nassau project. The reasons for this are as follows: i) Porknocking/informal mining or whatever you want to call it is inefficient, nobody knows the size, grade, or recovery characteristics of the material being mined and there has been virtually no exploration by modern methods at Nassau in spite of the fact that there has been more than 100 years of gold production, and ii) even though the stratigraphy of the rocks at Nassau is permissive for gold deposits, there has never been any diamond drilling at the Nassau project.
However, Sumin determined that gold has been reported in rock and auger samples over 5 kilometres at the Nassau project and the total inferred strike length of the gold-bearing structural corridor on the property is approximately 20 kilometres.
In 2017, 79North acquired the Nassau Project by merging with Sumin Resources based on 0.133 79North share for each Sumin share (a total of 3.34 million shares of 79North were issued).

Exploration by 79North started in earnest in August 2020. A LiDAR survey was completed in 2020 and our other data layers which consist of previous sampling, regional geology, artisanal mining areas, and airborne magnetometer/radiometric surveying, led us to outline 4 primary target areas for exploration named Marinara, Witlage, Pici, and Carbonara. 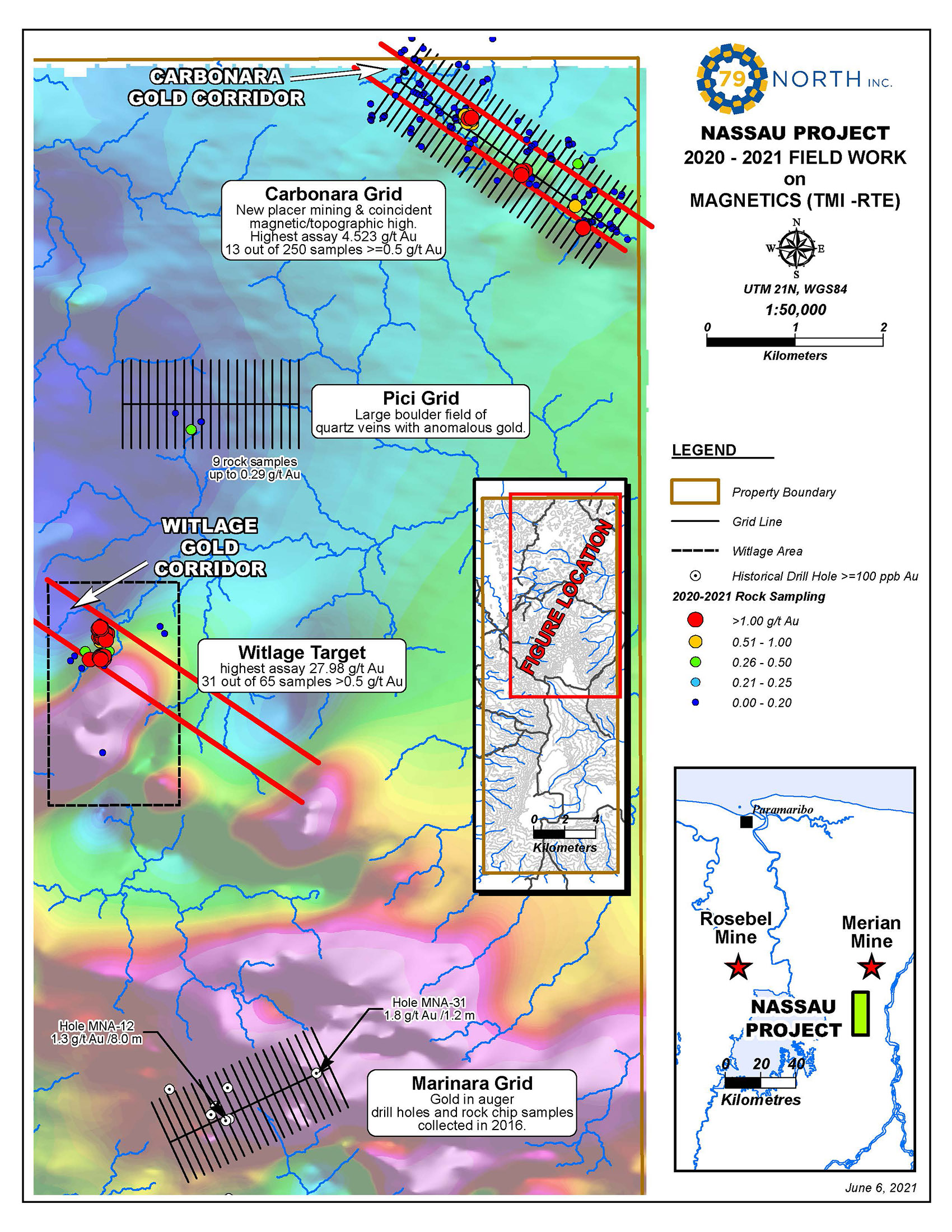 The 4 target areas at the Nassau Gold Project

The exploration of Witlage indicated a northwest-trending gold corridor at least 300 metres long, open on strike, and 300 metres wide that contains high grade gold in rock chip samples up to 27.98 grams gold per tonne. The Witlage gold zone is at the contact of conglomerates and cross-bedded arkose of the Rosebel Formation which are in contact with an underlying volcanic sequence of felsic schists and mafic intrusions that is either the Paramaca or Armina Formation (i.e., the same stratigraphy of the Iamgold Rosebel gold mine 60 kilometres to the west). The sampling results were published in two news releases in January and April 2021. Witlage is a priority drilling target and is ready for drilling. 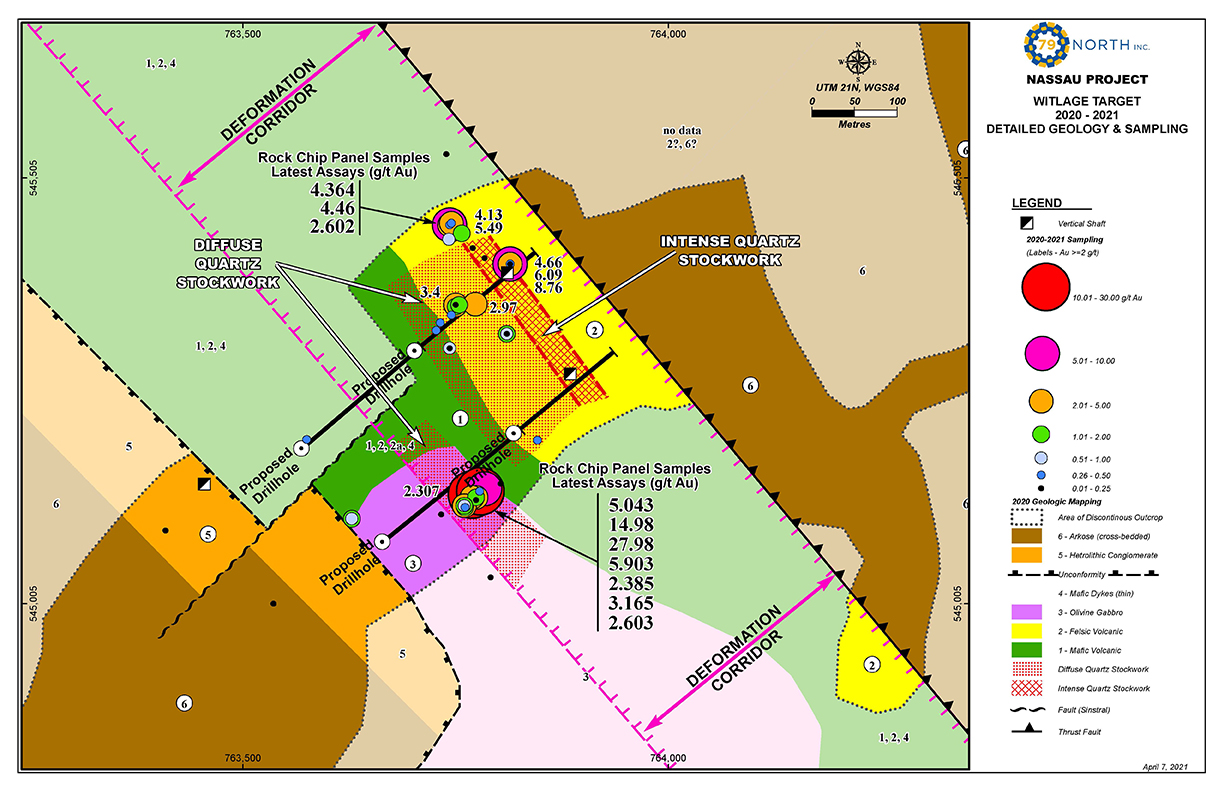 Results of sampling and detailed geological mapping of the Witlage Target, and proposed diamond drilling.

The work at the Carbonara target started in May 2021 and is ongoing. The work consists of a surveyed grid with hand auger samples collected on a 100 x 20 metre density. Mapping, prospecting, and geological mapping were also completed and are ongoing. The first sampling results from Carbonara were published in two news releases in May and June 2021. Three gold occurrences named Brodino, Arrabiata, and Puttanesca define a northwest-trending gold zone at least 1,600 metres long and several metres wide with rock chip samples containing up to 4.52 grams gold per tonne. The gold zone is massive silica alteration and quartz stockworks in a fine-grained sedimentary sequence in contact with a massive gabbroic intrusion that is also mineralized with gold. The northwest-trending Carbonara gold zone and Witlage gold zones are parallel and appear to be parallel to the northwest-trending gold zones at Newmont’s Merian gold mine 20 kilometres to the north. Our thinking is that Witlage and Carbonara are additional gold deposits in the rich gold field that contains Rosebel and Merian. Diamond drilling at Carbonara is expected to commence as soon as possible. 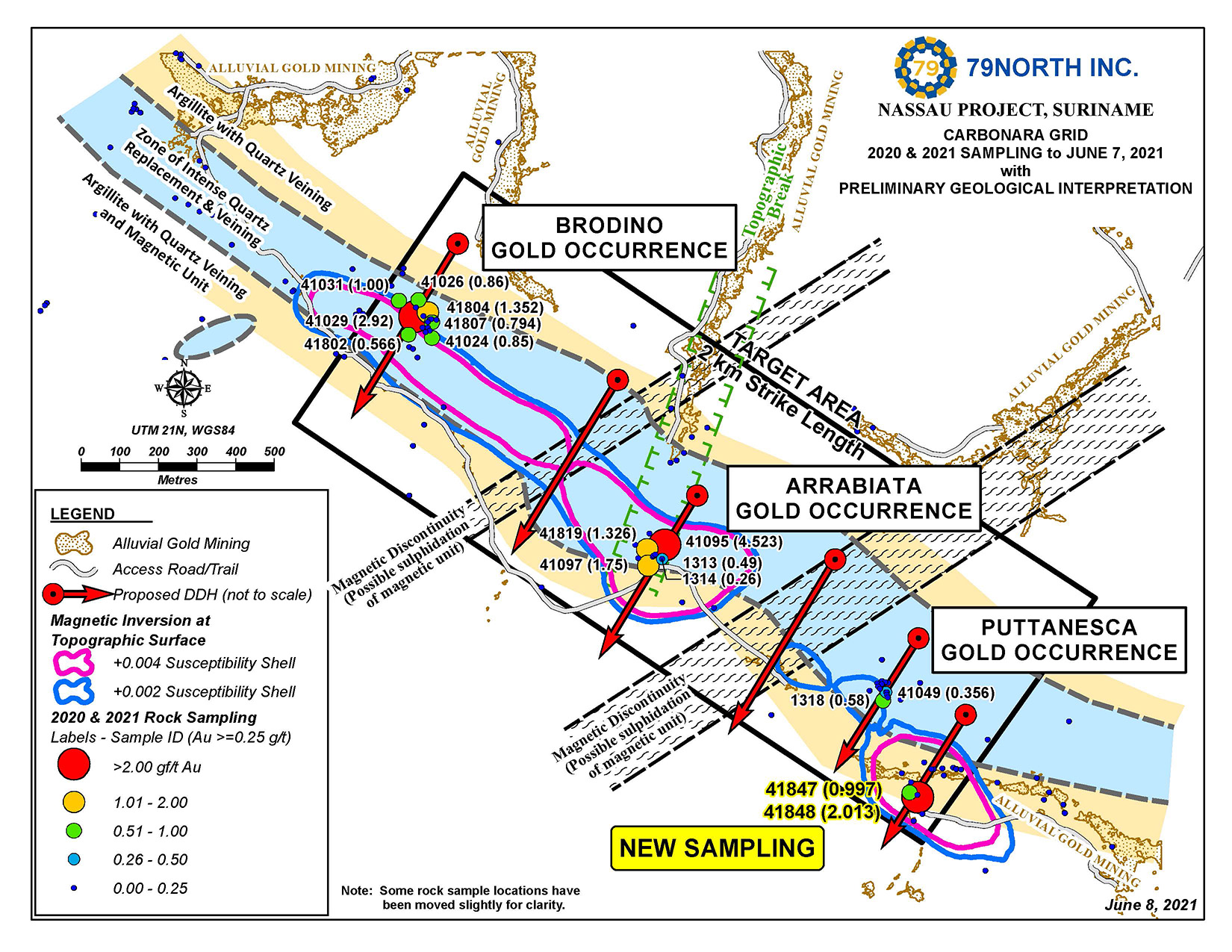 Results of rock sampling and geologic mapping of the Carbonara gold zone.